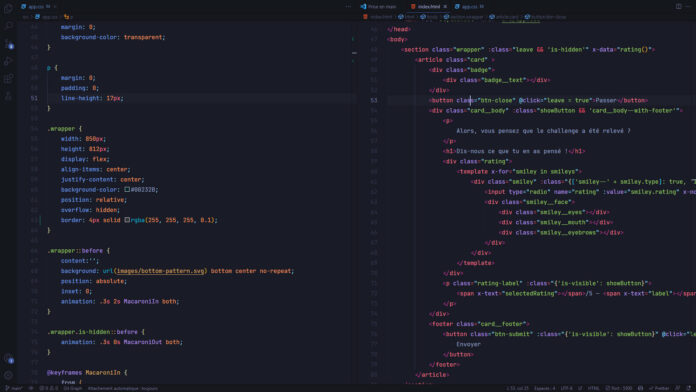 I offer you today a small summary of the challenge which was organized by BastiUI and Benjamin Code. This challenge is a code in The Dark where the objective is to code without being able to watch the rendering.

For this challenge, BastiUI took care of the model, letting subscribers choose the visual styles. So we end up with a notation system in mode obscure who uses the style neo-memphis with a rating system based on animated smileys. The model was made on figma and a prototype system allows you to see the animations designed for the different elements. The main difficulty of this challenge is based on the creation of these animated smileys because there are particular elements such as the mouth or the eyebrows which will require precise positioning, which is not necessarily obvious without having the right to use the rendering .

I invite you to try this challenge before watching the video. It’s a good way to practice HTML/CSS.

This challenge is interesting because it allows us to put into practice what we know and to question our knowledge since we cannot rely on the rendering. We are forced to base ourselves on what we know about the properties and their effects. In my case, here are the small details that I was able to retain from this challenge:

For the most curious among you, here is the result obtained at the different stages of the challenge on CodeSandbox

What is the most important life skill?

August 14, 2022
perhaps the most important life skill is the ability and willingness to learn.subsequently, What are your skills best answer? Sample Answer: “I...

How far back should your resume go?

What do consulting firms look for in a cover letter?